[solved] Grouping instances base on their family

i created two plugins and i see an interesting thing, two family with one name in the list of instances:
collect_rig.py 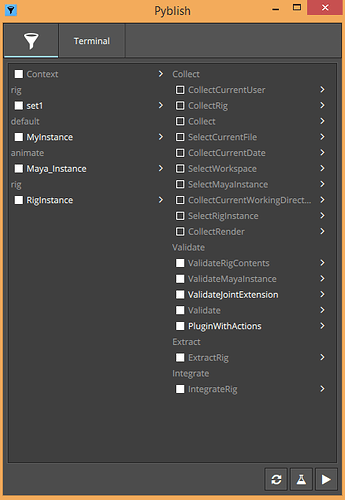 There seems to be a screenshot now in the updated post. He’s referring to the double family rig instead of having a single one with both instances.

i changed Selector to Collector, but does not changed anymore

Try this in the last-to-run collector.

It will sort instances by their family. 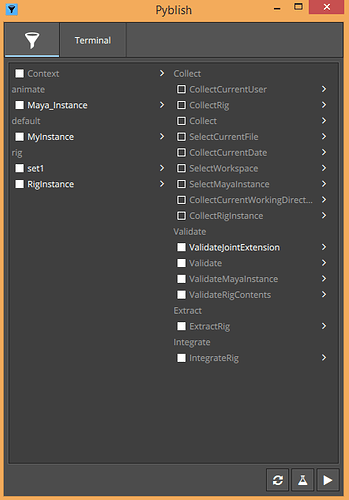 That actually does make sense!

i added the code to both plugins and it works

Actually you don’t want to put this in every plug-in. Just make a new SortCollector plug-in that runs last like order +0.1.

You’re using the python syntax for in-place list assignment with the context to override the data in the object itself.

This would make a new object and assign it to the context variable in the local space. The “new” assignment is important here, because that’s what the other one does different.

It’s more of a Python thing than a Pyblish thing. Just imagine you’re updating the context’ data so that it is sorted.

But i thought to this point that we should take two things in our consideration:

that i think second is applying now.

It will sort the instances by family and name, so you get a completely alphabetised list of instances.

Pyblish tries to do it for you, but prioritizes being clear on the order of processing the plug-ins.

They are actually combined (visually under a header) only when “processed one after the other”. Since Pyblish’ order of processing for plug-ins is dependent of the order they are added in the context.

In your scenario you have two collectors collecting instances of family rig that run with the same order as other plug-ins. The same order means it’s somewhat undefined which must run first or last and as such no specific order is assumed. This means your two rigging collectors might not run right after each other, another collector could be running in-between. That’s exactly what’s happening.

And this is stored in the context (as a list).
So you would have (somewhat simplified example here):

In this order even though set1 and RigInstance are both of family rig they cannot be grouped together because they don’t run one after the other. So @marcus solution is to “sort” the instances by family so they can always be grouped together.

Basically it is you taking control and telling it the order you prefer.

Theoretically you can sort it in any way you like and take full control over the order of the plug-ins if you need to. Again it’s something that Pyblish doesn’t try to make too much assumptions about.

I think this only happens with Plug-ins that conflict by the name of the class.

You will need to sort the context in any case if you want the instances alphabetised.

Thanks @BigRoy
yes, i see it with just this line order = pyblish.api.Collector.order + 0.1